Networking Doesn’t Have to be Intimidating

Networking can be intimidating for some but here are 7 tips to get the conversation rolling with the different people you meet at networking events. 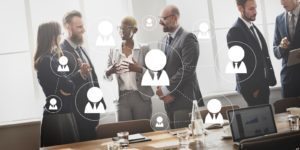 If you are new to networking it might be very odd to you. It might make you cringe seeing all the different people in the room of which you know no one.  As the event goes on and you start talking with people you are put at ease to see it is not as scary as you thought it would be. If you are not new to networking and still find it extremely hard to throw yourself into the conversation, we have some tips for you to give you the little push you need.

As odd as that might sound, everyone eats and everyone has opinions about it, which makes it a great way to open up a conversation. Food is the way to people’s hearts so use it to your advantage. Once that person shares their thoughts on the food they are more likely to open up about who they are and how they found the event.

People love getting complimented whether it be about their personal self and appearance, or about the choice of drink in their hand. The best way to start a conversation is to get someone interested, and giving a compliment is sure to draw them in.

As groups and clichés are common, even in the workplace, make sure to give equal attention to everyone. People will be aware of the awkwardness or how noticeable it is if you are not including them.  Networking is about everyone at the event meeting everyone so gives off the vibe to all that you are interested in meeting them.

Sometimes when you can’t find the words to talk up yourself or come up with a line about the food, the best way to go about networking is to put yourself out there, shake hands, and simply introduce yourself.  Some people find this easier and will make the situation better for them. You want to put yourself in the best light possible so make sure you are comfortable when networking.

Everyone wants to know that they are being heard and networking is all about meeting people. You are more likely to stand out if you remember how many kids they have or where they plan on going on their next vacation.  Networking is all about building business relationships and when you can impress them with details and show that you care, you’ve just won over your next client.

As much as networking should be about building business contacts, it is also about building business relationships. If you run out of conversation topics surrounding your businesses move on to questions about the surrounding area. Some examples are “Are there nice places to take clients out in your area?”, “I’m looking for a new dentist, do you know any in the area?”

The people who keep up the best conversations are storytellers. They can talk and have an example for everything. The thing is, if you notice, is that they do not go on and on. They are right to the point about what they are talking about. Be a storyteller, but don’t go far out of the limb. People know you are not Superman and can pick up a truck, but they can tell a boring story when it’s being told.

All of these conversation starters will have you on your networking way and will make you at ease when at the events. Happy Networking!